Customer Login
Search for a Shipment

Dave Miller, VP Human Resources, Loss Prevention, Safety & Compliance at Armour Transport, has been elected the new Chair of the Atlantic Provinces Trucking Association (APTA). The designation was determined on October 5 2017 during the APTA’s Annual General Meeting Conference, held in Charlottetown, PE. Dave will remain the Chair of the Board of Directions for a term of two years (2017 – 2019.) The APTA is a membership-based association that acts as a collective voice for the transportation industry in Atlantic Canada. It has been established for 60 years and currently has over 300 individual participants. The APTA has successfully created relationships
with government for lobbying efforts, established industry-based training/education programs, and acts as a platform for networking and advertisement.

Past APTA Chairs from Armour Transport have been Wes Armour and Vicki McKibbon. Dave has been a member of the APTA’s Executive
Board since 2006. He has won the APTA Safety to Motor Transport Award twice during this time. Dave has had a career in the Transportation industry for 34 years, and has been an employee of Armour Transport for over eight years. 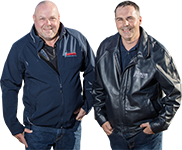